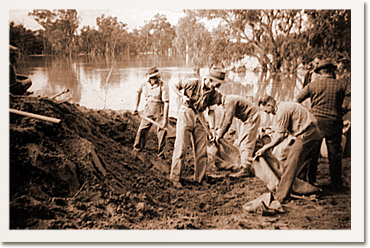 There have been two main floods that have threatened to inundate the settlement of Cadell. On both occasions the whole settlement worked together to erect banks and prevent the rising water from flooding homes and blocks. Horses with scoops were used to dump sand onto the banks and the tops were strengthened with sand bags and galvanised iron.

In the middle of July 1931, settlements along the river were preparing to cope with a flood that was expected to reach record heights. The bank that had been erected to protect the New Era irrigation property in the 1917 flood was in poor condition. Under instruction from the District Officer, Mr H Black, a second bank was made further inland in case the main bank broke.

A roster was set up for guarding the bank from 6pm to 6am as the peak of the flood was approaching. An alarm was sounded on August 25th for all available men to help reinforce the top of the bank because it was being washed away badly by wind and waves. Then, suddenly, on August 26th the bank broke and the roar was heard for miles. Acres of currants and lucerne were submerged and the water reached the second bank. If the second bank had not been erected, the water would have inundated the lower areas of the Cadell Irrigation Area. At the height of the 1931 flood all punts and ferries were out of action and the water rose to 138.4 feet (42.2 m).

In June 1956, following the flooding of the Murray and Darling, it became apparent that flood levels of the Murray River in South Australia were going to reach levels higher than ever experienced before. Immediate steps were taken to heighten the Cadell bank (New Era Bank) and banks were positioned around the Cadell Pumping Station and electricity supply. Another bank (Dalzell Bank) was erected from Spook Hill through Mr Dalzell’s block and into Mr Heinrich’s block. By July 29th, the old New Era Bank had broken and water was up against the Cadell Bank, water was entering the wood yard at the Pumping Station and pumps were installed at the Dalzell Bank to pump seepage back into the river.

In August, with the water still rising, the main banks were heightened and a number of homes along the river were flooded. The peak of the 1956 flood came on September 5th at 146 ft (44.5 metres). Maps produced by the Department of Lands after the 1956 flood suggested that if the main Cadell bank was breached, approximately 75% of the Cadell Irrigation Area would have been underwater and many homes would have been flooded.

The Cadell punt was of considerable importance during the 1956 flood because at one stage, it was the only punt able to operate between Victoria and Murray Bridge. Extensive efforts were made to keep the punt operating for as long as possible. Trucks, front-end loaders and bulldozers were used to raise the road approaching the punt and the bridge. The cable anchors were raised and new piles were driven in to hold them. Work continued until August 14th when waves severely eroded the approach and caused the punt to be closed. In the following week the road and bridge leading to the punt was submerged. The Cadell punt was the first river crossing to reopen after the flood peaked on November 15th.

During the floods, the threat of the two main banks collapsing was a constant worry to the townspeople. The school is situated on low land in the basin and if the New Era Bank ever broke, the flood waters would have inundated the school buildings with almost three metres of water. It was for this reason that evacuation drills were conducted regularly with the children. The whole school population would gather in the yard, march through part of the school fence that was removed for quick evacuation, and up Priest Road to the high ground of the eastern ridge. 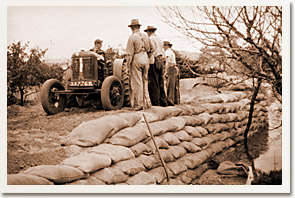 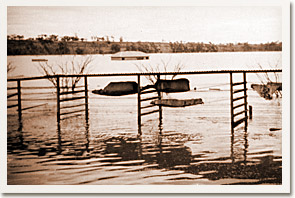 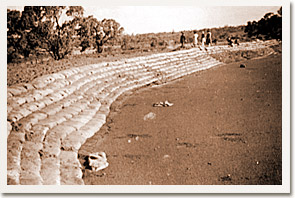 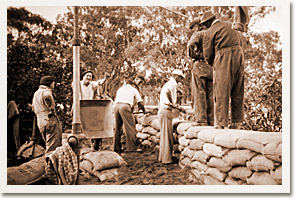 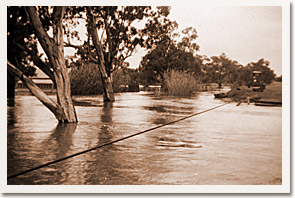 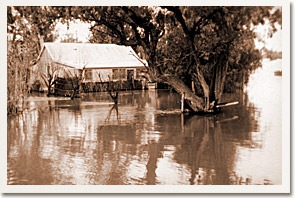