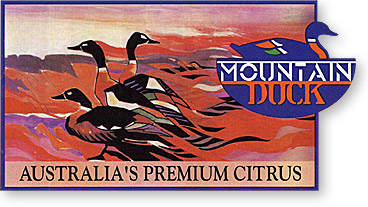 Following the success of other irrigated settlements in South Australia, Cadell was planted with citrus, stone fruit and vines. Some blocks were allocated partly planted while other settlers began planting their newly cleared blocks. When the Government announced intentions of establishing a canning factory in the region, plantings of stone fruit continued. However because the cannery was never erected, many settlers began to plant citrus and vines instead. Some of the fruit produced in the early settlement was sold fresh, but the majority was cut and dried directly on each property. The settlement became a patchwork of fruit trees, grape vines, lucerne patches and drying greens with each settler having a combination of crops.

Horses were used to tow implements up and down the rows, to cart spray vats and to cart loads of picked fruit back to the packing shed or drying greens. It was typical for each block to have at least one horse, and a patch of lucerne for feed. As tractors became more common, they increasingly replaced horses. Implements were converted to be towed behind tractors and new implements were designed.

Apricots were harvested in January with pickers carefully hand picking the ripe fruit and transporting it back to the cutting shed. The fruit was cut in half, placed on wooden trays, sulphured and placed on the drying greens to dry. The whole family helped all day to keep up with the ripening fruit. Many wives, grandparents and children helped in the cutting shed, singing and telling stories to pass the time. When the rush of apricots was finished, peaches, nectarines and pears followed.

Grapes were harvested in February and March and were picked into special buckets full of holes called dip tins. Each dip tin full of sultanas was dipped by hand into a dip containing a solution of oils and potash which split the skins and helped the fruit to dry. After dipping, the excess fluid drained from the holes and the sultanas were taken to the wire drying racks and spread out evenly. When sufficiently dry, they were shaken down onto hessian sheets and spread out on the drying greens to dry in the sun. The raisin grapes (Gordos) were dipped in a ‘hot dip’ filled with a boiling caustic solution and dried using the same process. 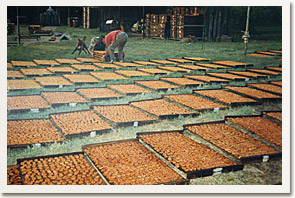 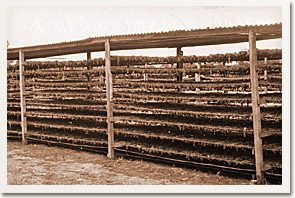 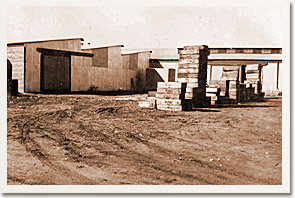 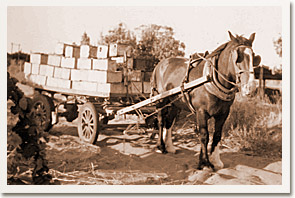 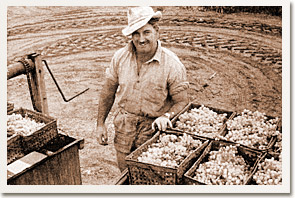 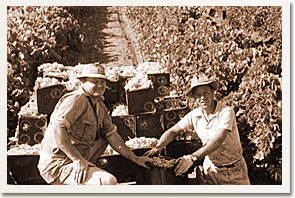