Cadell must see and do attractions

About 165km north-east of Adelaide, Cadell is easily accessible through the Barossa Valley wine region and a stone’s throw from the Clare Valley and historic mining town of Burra. Alternatively, if you’re travelling on the Sturt Highway we’re just a short drive from Morgan (12km) Waikerie (30km) and Blanchetown (42km).

Cadell is uniquely situated in an amphitheatre of which the old river cliffs form three sides and the present river bank the fourth. The Murray River is the lifeblood of the district and there are numerous camping, fishing and picnic spots along the river in Cadell. Take time to relax on the banks of this majestic river.

You can sit back and appreciate this beautiful part of the river from the Graeme Claxton Reserve. A road leads down from near the ferry to the Murray. The reserve has a BBQ, playground, toilets, shelter and houseboat mooring sites. 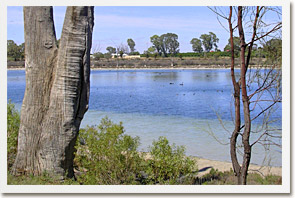 Because of its high elevation, the Cadell Wetlands is referred to as a temporary wetlands. This means the Murray River has to flood above pool level in order for water to enter the wetlands. Many other wetlands at lower elevations have water in them constantly because of the locks and weirs, those wetlands are referred to as permanent wetlands.

The local recreation facilities can also be used. Great for clubs and associations, it includes clean and modern shower facilities, kitchen, dining area and an oval… a great place for the kids to run around. It is one of the only places in the region where motorhomes can dispose of effluent safely.

Camping is available at the ground. Click here for more informaiton and prices

The Cadell Heritage Centre has historical and environmental displays about Cadell and also has tourist information. Cadell was established in 1919 as part of the Soldier Settlements Schemes along the Murray River. The Centre features photos and displays about the original settlement, the construction of channel irrigation and the settler’s daily lives. The Centre is open for bookings. Please phone 0484 767 236. More information.

The Scenic Riverfront Walk begins near River Fresh on River Terrace. The walk features limestone cliffs, birdlife and an Aboriginal Canoe tree. The bark cut from the tree would have been used to make a shallow canoe which could have been used for fishing and to cross the river.

Packing fruits locally produced such as oranges, limes, lemons, grapefruit, tangelos and mandarin. The site of this packing shed was originally chosen so that the products could be sent on rollers from the shed to the riverboats, taken to Morgan and there by rail to Adelaide. Oranges can be purchased from the front office an ours are welcome by appointment. Learn about the history of Cadell’s Fruit Industry or try some local produce…it’s Foodies Heaven.

This old Chimney was part of the Cadell Pumping Station, a steam engine that pumped water into the open channels for irrigation around the Cadell Settlement. Now the chimney is the only part of the Pumping Station that remains. The chimney was built in 1919 and is 60 feet high. It contains 27,000 bricks and took 3 men 18 days to build. The 1956 Flood level is shown on the chimney. Learn about Cadell’s early irrigation days.

The monument was erected in 1953 by local residents in honour of Captain Francis Cadell, the first Riverboat Captain to navigate the Murray River in 1853. The town was named Cadell in recognition of his efforts in opening up the Murray River for trade by paddle steamer.

This building was built in the 1930s and was an important place in the town as it was where growers would order their water for irrigation. The Water Master and ‘Water Joeys’ took the water orders and were responsible for the operation of the channel irrigation system. One room of the building was also used as a residence by a school headmaster in the 1930s and the verandahs were used to cater for the Cadell Bowling Club until the 1960s. The building now hosts many displays and photographs about the history of Cadell as part of the Cadell Museum.

The Cadell Institute was build in 1936 by marble foundation stone originally from Parliament House. The project was community funded and cost 1500 pounds. The building has a rich history of theatre plays, dances, movie pictures and social functions.

This garden and stone cairn are in remembrance of those from Cadell who fell during World War 2. Anzac Day services are held at this site. An honour roll for residents who fought in the wars is in the Cadell Institute.